"When i started listening, i was like, "Damn, @potatocubed has made a game that every superhero podcast should play" and by the end of it i was going, "OKAY SO I NEED TO GET THIS AND MAKE A NEW MULTIVERSE"
-- Brandon Leon-Gambetta,  author of Pasión de las Pasiones, host of Protean City

"@potatocubed made an AMAZING single-player game that captures the love, joy, nonsense, and chaos of superhero comics, and it is legit one of my favorite RPGs"
-- Jeff Stormer, host of Party of One (after playing See Issue X here)

Telling superhero stories is easy, right? Just come up with a name, some powers, a personal hook or two, and you're good to go!

Sure. But what about twelve issues in? Or fifty? Or two hundred issues, three alternate timelines, one death-and-rebirth, and a handful of holiday specials which may or may not be canon? How easy is it then?

See Issue X is a tabletop roleplaying game where you will both tell the story of a superhero (or several) and also stand in the shoes of the writer as you struggle with their ever-more-unwieldy backstory. When the grey aliens threaten the Earth, that's one thing. When they kidnap Aunt Harriet's dog, that's... a little odd, but you can sell it. When they bring the hero back from the grave because of their shared love of board games, you know you're working with real comic book nonsense.

Luckily, this is cape comics: the nonsense is the bit we love best!

See Issue X can be played as a solo journalling game or as part of a group where everyone has their own character. Even better: you can play solo, take your character to join a group for a team-up event, then go back to playing them solo -- or knock out a few solo adventures between regular group sessions as part of your own continuity!

(As a note, the Excel file hasn't been rigorously tested and so is likely buggy as hell. I will be available for technical support on a 'when I get a moment' basis.)

If you want to know how the game plays Big Gay Nerds have played it on-air (part 1, part 2) and I played through a couple of arcs on Twitter as a way of showing how it works (arc 1, arc 2).

See Issue X is a complete game with 19 playable arcs and an assistant spreadsheet if you don't feel like writing on playing cards -- which, to be fair, can be a little tricky, especially with face cards. Pay the money, get the game, play the game, enjoy.

What it does not have, is interior art.

I would also like to pay myself for the work I've done on game design, writing, and layout.

So here's my plan: As of launch, See Issue X is about $600 in the hole -- the cover art is most of that, plus some other assets I used in the layout, plus itch's cut, plus some rounding up just in case. Once that $600 is cleared, which will take 40 sales at the base price, I'll start splitting the takings between money for me and money for art.

In order to download this game you must purchase it at or above the minimum price of $15 USD. You will get access to the following files:

If we've purchased the book here, will we get the final version with art that is being funded through Kickstarter? Or do we need to back there too? Thanks!

Hello -- if you bought the game here then you'll get the updated pdf with the art as well. I'm just going to update the files when they're ready, and you'll be able to grab the fresh new one.

I had pledged on gamefound but since it didn't hit goal I went to itch.io just now to buy it. Hope your art costs get covered

Holy smokes this game is genius. Superhero continuities are about as messy as fiction gets and the core mechanic of this game really captures that feeling in the best of ways.

Also, I found a minimalist deck of cards on Amazon that lends itself well to being written on 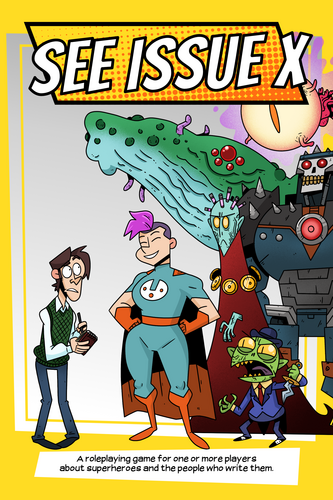 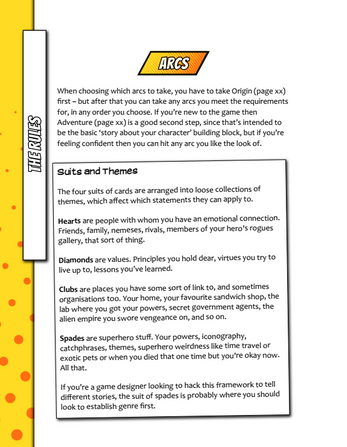 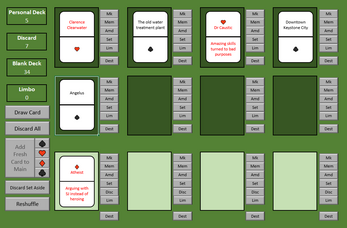